Denny Abbott, a longtime advocate for children, the poor and crime victims in South Florida, grew up in Alabama, where he received an early education in man’s inhumanity to man. 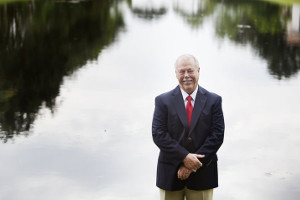 Denny Abbott poses for a portrait by a lake outside his house in Greenacres. Abbott has written a book about his life. He is from Alabama and was a probation officer there. While in that job he was responsible for closing down what amounted to a slave labor camp for young black men who were in custody. He also led the movement to desegregate orphanages in Alabama. Later in South Florida he headed the Adam Walsh Foundation that helps locate missing children and he was the head of the Palm Beach County office of Victims Services, assisting the victims of crime. (Laura McDermott/The Palm Beach Post).

In his new memoir, “They Had No Voice: My Fight for Alabama’s Forgotten Children,” (www.theyhadnovoice.com), Abbott describes just how intricate racial segregation was in Montgomery. Not only did black people have to sit in the back of the bus, if all the white seats were taken and a white person boarded, the whole first row of blacks had to get up, stand, and let that person sit, because blacks could not be in the same row as a white person, even across the aisle.

Blacks had to pay the driver in front, then get off and go to the rear door to board, so they wouldn’t even walk by white people.

“Sometimes they’d pay the driver but the bus would pull away before they could get on,” Abbott writes. “Other times they barely made it.”

For Abbott, the segregation surrounding him became a crucible of conscience and he would commit himself to helping people he felt were at extreme risk. Later in his career, in South Florida, he ran and greatly improved juvenile detention centers for the Florida Department of Children’s Services. He also served as national director of the Adam Walsh Child Resource Center, fostering laws to help protect children. He started the center with John Walsh, host of America’s Most Wanted, whose son Adam who was abducted in 1981 and later found dead.

Abbott, who lives in Greenacres, also worked as coordinator of victims services for Palm Beach County. In that role he developed a close relationship with Patricia Bowman, the young woman who in 1991 accused William Kennedy Smith, of the Palm Beach Kennedy clan, of rape. The subsequent trial was splashed across the national media. Abbott believed Bowman’s account but Smith was acquitted.

But it is Abbott’s early years in Alabama that fill the majority of his dramatic memoir. Those pages tell the story of a 21-year-old with a degree in sociology who found a job as a probation officer with Montgomery County. That included eventual contact with juvenile offenders detained at a facility for black minors of both sexes, called the Alabama Industrial School for Negro Children at Mt. Meigs.

Abbott, and his co-author Douglas Kalajian,a former Palm Beach Post journalist, introduce the memoir in dramatic fashion: “When I was a young man in the 1960s it was my job to deliver black children to a slave camp on the outskirts of Montgomery, Alabama.”

“I’m talking about a place where children as young as twelve were held by brute force and put to hard labor in the fields,” Abbott writes. “They were worked until they dropped and when they dropped they were beaten with sticks. Often they were beaten for no reason at all and sometimes they were forced to have sex with the men who beat them.”

The children detained there received no schooling or counseling, no medical treatment unless they were seriously ill. They were badly fed and the facilities were overcrowded and filthy. They were used as forced labor on farms belonging to members of the Board of Trustees of the facility, all of whom were white. They were regularly beaten with mop handles and fan belts. The director of the facility was a former farmer with a fourth grade education and no training in juvenile detention. He did a lot of the beating.

By that time Montgomery had become a major venue in the civil rights movement. Abbott recalls seeing Martin Luther King Jr. many times on the streets of the city.

In 1963, Abbott, 23, was made chief county probation officer. He used his position to get a bond issue passed and to replace a substandard county detention center in Montgomery. He also won funding to greatly expand his staff. But that did not affect the facility at Mt. Meigs.

One day in 1969, five teenage black girls showed up at the probation offices asking to see “the boss.” They were all former detainees at Mt. Meigs.

“The girls took turns describing a nightmarish routine of hard labor, beatings and sexual abuse,” Abbott writes. One of the girls had been beaten until she miscarried. 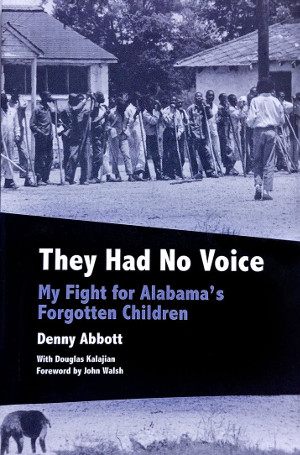 WPB resident Denny Abbott helped desegregate Alabama orphanages and also shuttered a “slave camp” for black kids there. In South Florida he headed the Adam Walsh Foundation. He has just written a memoir. They Had No Voice, My Fight for Alabama’s Forgotten Children.

By that point, Abbott had received other accounts of mistreatment at the facility, but had found no support from local or state officials to change conditions there. That day he decided to do something about it. Together with a local lawyer, Abbott chose a path he knew would make him reviled figure in local circles: he decided to use the federal courts to change Mt. Meigs, the same federal courts that were imposing desegregation on the South and incurring the hatred of many traditional southerners.

“Going to federal court or any federal agency would be viewed as treason by many people I knew,” Abbott writes.

The case was filed, alleging that the constitutional rights of children at Mt. Meigs were being violated. Retribution was quick. His own boss, a judge, suspended him from his job, for filing the suit without permission.

“Neighbors walked back into their homes whenever I stepped into the yard,” he writes. “Shopkeepers I’d patronized for years turned their backs when I walked into their stores.”

Meanwhile, the U.S. Justice Department confirmed the facts alleged by Abbott. The state was forced to investigate and the governor, Albert Brewer, admitted that the children had been victims of “some cruel punishments.” To avoid the federal government imposing changes, Alabama itself transformed Mt. Meigs within months. The changes included an end to forced labor, the introduction of school classes with qualified teachers, and vocational training. Guidelines were set for corporal punishment.

“There would be no more beating with hoe handles and fan belts,” Abbott writes.

A federal judge oversaw the changes and ordered the facility desegregated, so that white juveniles would also be detained there.

Abbott would later go on to file a federal suit challenging segregation in Alabama orphanages. That brought him anonymous phone threats, including some from callers who claimed they belonged to the Ku Klux Klan.

This time he was fired and never did get his job back. But Abbott won the larger battle. The state’s orphanages, which were all private, eventually integrated.

Abbott, 74, is now retired, but still works on children’s issues.

His latest cause is trying to get the Florida Legislature to force summer camps to obtain licenses and have all employees undergo criminal background checks. That effort was provoked by a series of articles in The Palm Beach Post exposing that some camp counselors have histories as sex offenders or have been guilty of other crimes. So far the legislature has balked, saying requiring such licensing would be too expensive.

“Children have no power of their own; they don’t vote and they don’t make campaign contributions,” Abbott says. “We all have individual and collective responsibilities for the nurturing and protection of children.”